Do you folk remember Sony Xperia P- device with that persistent glowing light under the screen, a thin transparent strip that lit up with many colours? If you don’t then head out here to know more.

The company is reportedly now making a successor to that mid-range device with high end specs and when we say high end, we mean Qualcomm Snapdragon 810 with 3GB RAM, 12.1 Exmor RS, 4K recording and Front Camera 5.1MP with support for FHD video Recording.

Camera is amazing on the P2- With 25mm f/2 OGS lens which promises more clarity and depth in pictures, ISO 64- 25600 Range which tells us that the sensor is highly responsive to light with this enormous range. 4K video recording is always appreciated. Not only this but the camera is capable of shooting is JPG, BMP, PNG, RAW (12 bit) – this will give user more control on editing and giving the picture a complete finish. 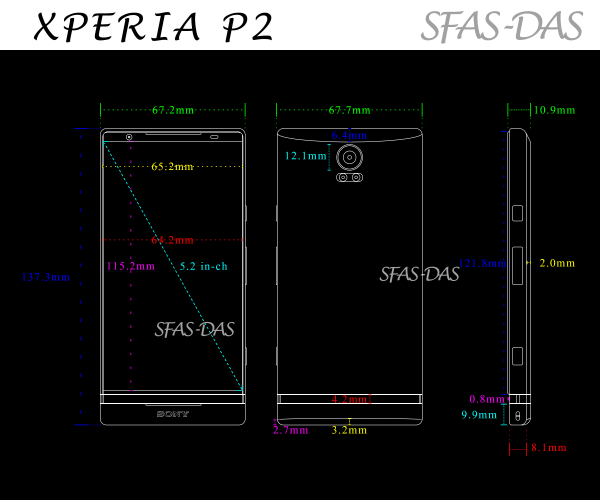 And Battery is speculated at 4240 mAh, WOAH! A battery that huge will get this device a day and half at regular usage and if minimized it would give 2 days of usage. (Confirmation after the release of device)

What if Sony is trying to make this handset as its Flagship for the year? Highly unlikely, because that would in turn break the hierarchy of Sony Xperia Z Series, and also the display is also just FHD and there is no way a company like Sony is going to compromise on display on its latest flagship. Not to mention that he P2 is different in design than its flagship counterparts, but that’s a good thing because Sony is lagging behind in the terms of design innovation.

Display is highly crucial and nothing less than QuadHD would suffice in the market today as a flagship, making it very clear that the Sony Xperia Z4 that was launched in Japan earlier this month is not the Sony flagship for the year.

What do you people think of this leak? Is Sony giving a mid-range handset, too much importance? We’ll love to hear from you guys. Help yourself with the comment section down below. Until then, keep Androtrending!